Since last Friday I have had the pleasure of staying on the Adriatic coast of northern Croatia. That alone has been a wonderful treat. This afternoon’s walk along the coastal road was sunny and beautiful and quite warm, a first for the week. The crowds are gone from this popular summer venue, but the vistas are undiminished in their timeless beauty. 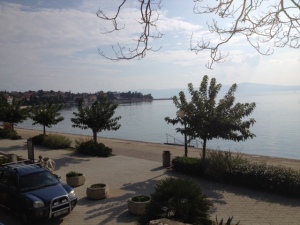 I am here for a small gathering of Christians, most of them from the former Communist block of central and eastern Europe – Bulgaria, Serbia, Croatia, Ukraine, Hungary and Romania. There are four westerners in the group – a German living in Romania, two Californians living in Spain and me.

I was struck again this morning with how unlikely this sort of gathering is.  25 years ago it would have most likely been impossible. They were the bad guys, the black hats in the “cold war,” the political chess match between NATO and the former Soviet Union. Thank God, most of that is history. And here we are now with the freedom to travel and gather as believers in a place that used to be another part of that block of bad guys, Yugoslavia.

Today we all meet as more than friends. We are family, brothers and sisters in Christ, joined to celebrate the grace of God, to pray for a different peace and to engage in a different but far more significant conflict. As everyman’s story is special, theirs are no less so as they relay the audacious love that Father had for them to reach them in the darkest of times in their lives and gift them with His grace of life in Christ Jesus. This has been the best treat for me: to celebrate the anniversary of my 40th second-birth day (as well as my 68th birthday!) with this branch of my eternal family.

Tomorrow I’ll board a plane in Zagreb and fly to Warsaw, Poland, another one of those formerly black hat places. There I’ll regather with my daughter and my Polish son-in-law and my Polish-American grand daughters and continue our mission to call Poles to come and be transformed by the powerful grace of God.